Fifteen emerging scholars and practitioners from different parts of the Philippines were selected for the Next Generation One Health Philippines (NGOHP) Fellowship. NGOHP is a project under the Planetary and Global Health Program of the St. Luke’s Medical Center – College of Medicine and is funded by the International Alliance against Health Risks in Wildlife Trade, a newly launched network led by the German Government through GIZ. The project aims to enhance the domestic capacity of the Philippines for One Health transdisciplinary research and knowledge translation to effectively tackle wildlife trade and biodiversity loss as drivers of infectious disease emergence, with the purpose of preventing future zoonotic spillovers in the next 50 years.

The fellows were selected based on their previous and emerging work on One Health issues and potential for future One Health leadership – while also ensuring diverse representation across varied professional, educational, and geographical backgrounds. The chosen fellows come from a wide range of natural, physical, social, and health sciences fields such as: biology, environmental science, agriculture, wildlife studies, economics, psychology, anthropology, law, medicine and public health. 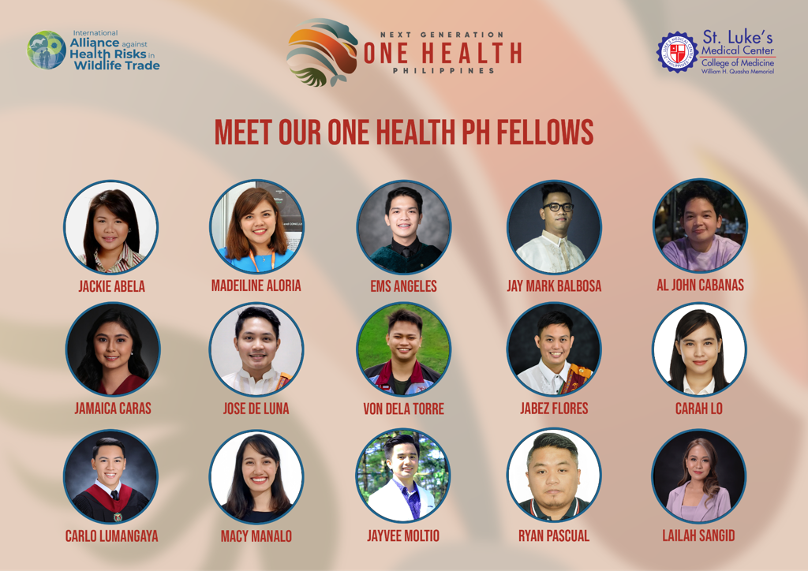 2022 Next Generation One Health Philippines Fellows

The 15 Next Generation One Health Philippines Fellows:

The fellows were officially welcomed during an online orientation conducted last October 8, 2022. Together, they are participating in a year-long fellowship that begins with an online introductory course, followed by a workshop in collaborative research, leadership, advocacy, and communications. Supported by mentors and small grants, fellows will conduct transdisciplinary research on issues surrounding wildlife trade and zoonotic spillover prevention. To ensure immediate dissemination and translation of findings, fellows will participate in One Health dialogues with relevant stakeholders.

For more information about the fellows, visit our website and our social media page.